Milosevic Apologists in Syria and the Left’s Dichotomy Problem

If you’ve read my last two posts, here and here, you’ll see two specific individuals (Bartlett and Beeley) I’ve outlined that have been going on delegations spearheaded by the World Peace Council. They both (here’s Beeley) repeatedly addressed that they’ve been a part of these delegations, that allows for “independent” investigation into the Syrian government. These tend to feature a personal audience with Assad. (Vanessa Beeley, Assad, and the World Peace Council in July of 2016)
What is the World Peace Council? The WPC is a NGO of the United Nations, developed decades earlier with most of its funding from the Soviet Union (I’m not insinuating anything bad here, if the US regime can have NGOs serving as its foreign policy agents, it’s understandable the Soviets would do the same). Despite the Soviet Union’s collapse, it is still running today, but its finances have remained largely secret. The only source I have on their money trail happens to be from a Western source I find questionable, so I’m going to default to that there’s nothing on the internet I’ve come across about their funding. If you do, hit me up, I’ll update here.

The objective of the WPC is anti-imperialism, a noble cause I always advocate for, and it has largely resisted western imperialism ever since its inception. Most of this isn’t problematic. Until you understand they’re the type of anti-imperialist that refuses to say words like “Bosnian genocide” and consistently, up into 2014, expresses respect for Milosevic, and had former leadership even petitioning for his release. (funny enough, mentions New World Order again). These folks have headed multiple delegations of popular, established reporters that have celebratory dinners with loyalist politicians (as in my last post). This is a cut and dry situation for the WPC, it is no wonder they consistently have platforming opportunities with RT.. Or at least their journalists do. 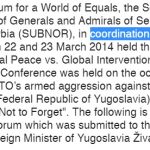 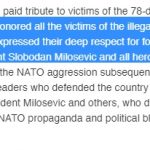 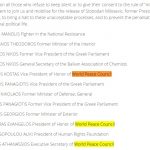 Apparently, there’s no limit to what atrocities you can ignore to resist the (insert sarcasm) greatest atrocity of imperialism (end sarcasm) as if civilians aren’t being slaughtered either way. Why do I keep hammering on this, why? The US regime is killing innocent civilians, funding terrorists, and is focused on regime change.. Yeah, we know. We’ve always known this.

You see, the current radical left has a problem. They develop meaningless dichotomies that are counterproductive. We live in a world increasingly becoming less about West vs East, especially with the Trump regime coming in. Simultaneously, they are developing a dichotomy that shouldn’t exist of anti-imperialism versus anti-fascism. Anti-imperialism and anti-fascism are hard lining pillars of our identity, but when we look at Syria, we are seeing a case of which in the name of anti-imperialism, the left is casting aside its anti-fascist absolutism.

Before, if a source had any remote connections with fascism or racism, it was cast aside, and rightly so. Now? Modern wars make for even stranger bedfellows. Even when you’ve got genuine left uprisings still strongly going, such as Rojava (if you’ve missed how far left and how antifa the situation is..), there are leftists willingly to completely trash it in the name of anti-imperialism. This article, phrasing it as the Red-Brown Alliance, paints a more in depth portrait.

If you know anything about Syria, historically, is that it was a fascist regime, which harbored Nazis, that essentially traded in its appearance for the look of a neoliberal reformer. Those that rose in 2011 had genuine reason to (I encourage reading Burning Country by Leila Al-Shami and Robin Yassin-Kassab). A few years later, what was of the uprising has largely died (it still exists), and extremists funded by the United States for purpose of regime change that took over. This is the extremely short summary. To disrespect the genuine elements of uprising, to absolve the regime of its crimes, to ignore the dying Syrian leftists in the name of retaining a fascist regime in neoliberal makeup for the sake of anti-imperialism.. is part of the dichotomy problem you all are facing.

A dichotomy that allowed for the relatively easy reflex of anti-imperialist tendency (as long as you opposed the west) is dying underneath ever ballooning complexities and anti-fascism has taken a back seat as the far right rises in power. This never had to be anti-imperialism vs anti-fascism. You can be against both regimes, you can be against intervention, you can be for the uprising, you don’t have to fucking source fascist bedfellows, and you could realize the world is infinitely more complicated in a way that your foundational theorists understood better than you currently do. Somehow, betraying the left in Syria for purposes of anti-imperialism and siding with an empowering far right is somehow doing not only the right thing, but the intelligent thing.
We’re fucked, aren’t we?